My home away from home … It was a world away from the gray skies of Cambridge. I’ve traveled the globe, but I’ve never found anywhere quite like this.

The Central Coast of California spans an area that stretches from the Monterey Peninsula to Point Magu, just North of Malibu. It’s about 260 miles of coastline. Craggy cliffs, rolling hills, oak trees, eucalyptus groves, the ever changing geography is mesmerizing. At the epicenter of it all gleams one of California’s crown jewels, Santa Barbara. Nicknamed “the American Riviera” this little town on the Pacific has long attracted a wide variety of souls seeking it’s open spirit, beautiful vistas and bountiful ocean.

First to settle here were the Chumash Indians, some 13,000 years ago! Followed by travellers from Europe in the mid 16th century. Industrialists from the East at the turn of the 20th century, followed by movie stars from the early days of Hollywood to present day

on ward. The nectar of Santa Barbara and it’s outlying areas of Montecito and Hope Ranch have enticed a steady flow of barons, artists, ranchers sun seekers and soul searchers. People come from all over the world want to intoxicate themselves with this special place.

Whether it’s the red-tiled roofs, verdant landscape, temperate climate or sublime pace, Santa Barbara is loved for those and a thousand other reasons. A destination to escape to, or a place to call home. Welcome. Breathe deeply and stay awhile. Be forewarned though, you may never leave.

How sweet could that be? 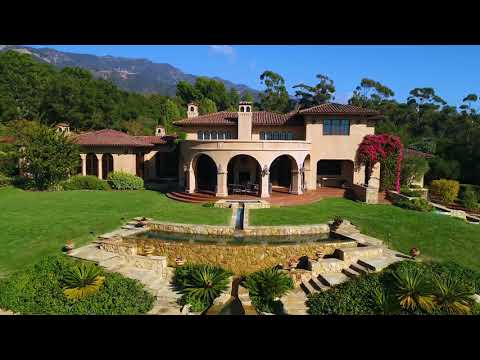